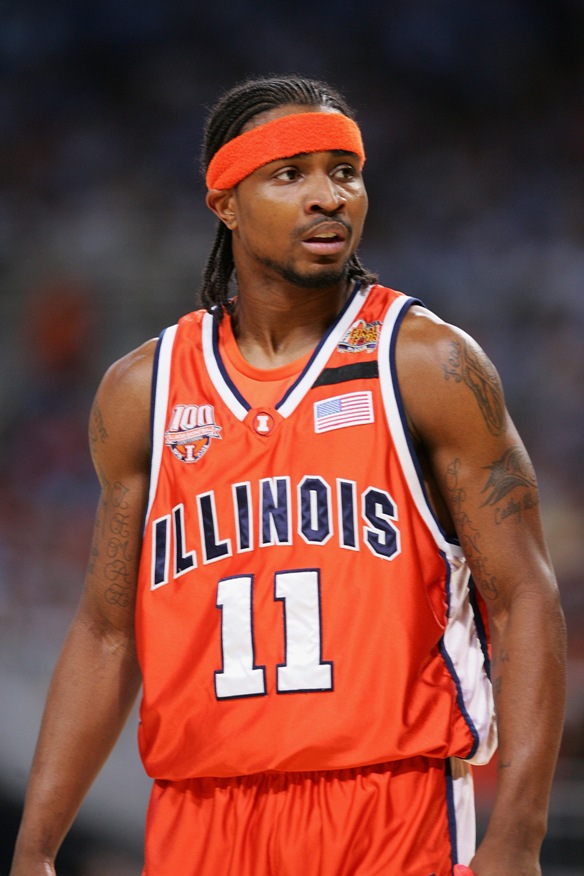 Dee Brown to be Featured Speaker

Join us for a dinner “tipping off” the upcoming basketball season.

Dinner will be a country buffet to featuring fried chicken and ham and all the fixin’s and our special Big Ten cake. A cash bar will be available. The cost of the event is $40 per person.

A special raffle will be held featuring the limited edition collectible bobble heads of 2005 Illini team members - Deron Williams, Roger Powell and Luther Head. Tickets will be $5 each or 6 for $25. Pre-dinner ticket purchase is available and you need not be present to win.

A silent auction will also be held, and the evening will conclude with the live auction of a Dee Brown bobble head!

To make your reservations, click on the link below, or click here for a printable reservation form to mail reservations, and for information on how to purchase tickets prior to the dinner. The deadline for reservations is Friday, October 16, 2015.

Former Fighting Illini All-American point guard Dee Brown is in his first year as Special Assistant to the Director of Athletics, joining the Division of Intercollegiate Athletics full-time on September 8, 2015 following a nine-year career playing professionally.

Brown – the 2005 Sporting News National Player of the Year and winner of the 2006 Bob Cousy Award as the nation's top point guard – serves many duties in his current role, including representing the Director of Athletics and Illinois Athletics at a variety of campus and off-campus functions and meetings, and relationship building with campus administrators and local and regional business leaders and donors. Additional aspects include outreach efforts and fundraising. He also may assist in the recruiting process in accordance with NCAA rules and serve as a mentor for current student-athletes in all sports while developing and growing successful relationships with former Fighting Illini.

A native of Maywood, Illinois, Brown was named Mr. Basketball in Illinois following his senior season at Proviso East High School, when he also was selected a McDonald's All-American. He made an immediate impact with the Illini, earning Big Ten All-Freshman Team honors while helping lead the team to 25 wins, a Big Ten Tournament title and NCAA second-round appearance. The Illini won 26 games, an outright Big Ten championship and advanced to the Sweet 16 during Brown's sophomore season. That set the stage for a stellar junior campaign in which the Illini won 37 games to tie the then-NCAA record for most victories in a season. Illinois won a second straight outright Big Ten title, added a conference tournament crown and advanced to the Final Four following a thrilling come-from-behind victory over Arizona in the Elite Eight. The Illini went on to finish as National Runner-Up. Brown was named a consensus first-team All-American and swept Big Ten Player of the Year and Defensive Player of the Year accolades. His senior season concluded with consensus second-team All-America honors as the Illini won 26 games and advanced to the second round of the NCAA Tournament.

Brown remains the winningest player in Fighting Illini basketball history, playing in 114 victories during his career. His name is etched all over the UI record books, where he still ranks third all-time in scoring (1,812 career points), second in career steals (231) and 3-pointers (299) and third in career assists (674).

Brown is married to the former Delores Confer, who also attended the University of Illinois. He has four children, sons Darrian and Daniel and daughters Michele and Zoe.
Click here to buy tickets!!!