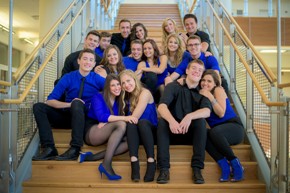 JOIN UIUC A CAPPELLA GROUP NO COMMENT FOR A FREE CONCERT

The student-led a cappella group from the University of Illinois, No Comment, will be hosting a free concert at the Cathedral of St. Peter (1243 N. Church St, Rockford) on Tuesday, January 12th in the Fellowship Hall from 7-8pm. No Comment has been nationally ranked the past few years and placed third last year at the International Championship of Collegiate A Cappella Midwest Semifinal. They also had the privilege to be featured on PopTV’s reality show, Sing It On, which aired last summer, and now can be seen on Netflix! No Comment performs a variety of music from pop, to rock, to musical theater and everything in between! At the concert, a goodwill offering will be accepted. We hope to see you there!