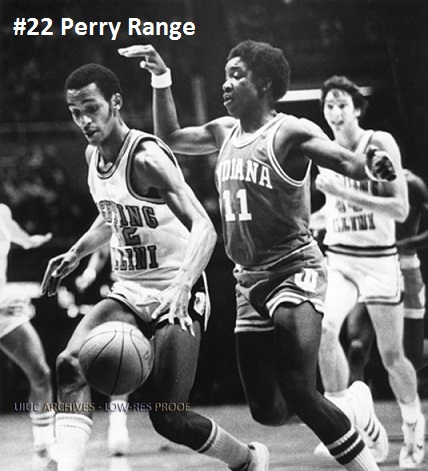 Join us November 3rd for the 2016 Big Ten Tip-Off Dinner. This year's event will be held at Sam's Ristorante and Pizzeria on Riverside in Rockford. The event will begin with a social hour at 5:30, dinner buffet starting about 6:45, and the program at 7:30pm.

The speaker for the evening will be Perry Range, former South Beloit SOBO who went on to play four years of basketball at the University of Illinois. Perry played for Illinois from the ’78-’79 season through the ’81-’82 season.

During his freshman year, Perry was part of a team that went 19-11 after starting 15-0 and climbing to number two in the country, including an upset of top ranked Michigan State, led by Magic Johnson.

In his sophomore year, the team achieved the first of Coach Henson’s 11 20-win seasons at Illinois. That year, the Illini made their first post season appearance since 1963, finishing third in the NIT, defeating eventual NCAA champion Louisville along the way.

As a junior, Perry and his Illini teammates finished with a record of 21-8, a third place finish in the Big Ten, and an invitation to the NCAA tournament.

Perry served as co-captain of the team during his senior year, when the Illini went 18-11 and made their third straight post-season appearance in the NIT. Perry also led the team in field goal % that year, and he still ranks in the top 10 for career field goal %.

The cost of the event will be $35 for members or $40 for non-members. We hope you'll join us for this great event!