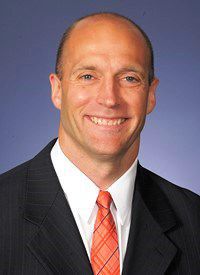 This years event will begin with a social hour at 5:30pm, dinner at 6:30pm, and program at 7:00pm. The program will feature Josh Whitman, Athletic Director at the University of Illinois. Cost of the event is $35 for members and $40 for non-members. The dinner will be an Italian buffet with Italian salad, lasagna, mostaccioli with marinara sauce, bowtie pasta with al fredo sauce, Italian sausage, meatballs, and grilled chicken pieces, a vegetable, and cookies for dessert.

Josh Whitman was a standout tight end for Illinois from 1997-2001, earning Academic All American honors in 1999, before graduating as a Bronze Tablet Scholar in 2001. He went on to play four years in the NFL, playing for the Buffalo Bills, San Diego Chargers, Seattle Seahawks, and Miami Dolphins. After retiring from football in 2004, Josh enrolled in law school at Illinois while working in the Department of Intercollegiate Athletics.

To make reservations, click the link below, or send the names of those attending, along with a check for the appropriate amount to Jim Waddell at 5048 Telluride Ct., Caledonia, IL 61011.